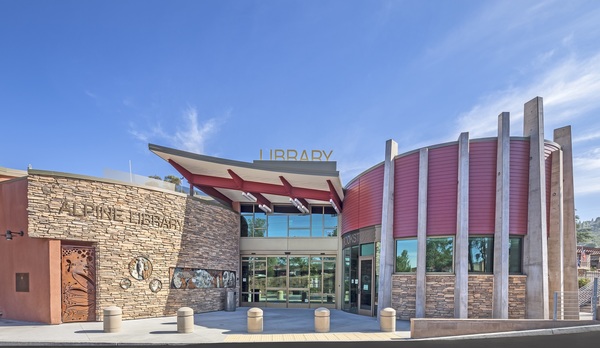 The new 13,500-square-foot Alpine Library, which opened in May 2016, is the first Zero Net Energy building built by a local government entity. Through thoughtful design, the library’s projected energy consumption was cut nearly in half, while construction costs stayed within the project’s 10-million-dollar budget. The Alpine Library was a design-build (D-BE) project in which the architect and general contractor performed as a single entity. The Brummitt team prepared concept-modeling studies to identify the feasibility of the project to attain Zero Net Energy. The results gave the County the confidence to include ZNE in its Request for Proposal (RFP). It also assisted the D-BE team to understand what its energy targets and strategies would need to be prior to design, as well as provide appropriate roof space for the PV and solar water heating systems. In the final ZNE design, the project utilizes a solar panel system spanning its long south roof, angled to take advantage of the sun’s rays. The solar panels are expected to produce about 108,500 kWh per year. The library’s windows also take the sun’s position into consideration, as many of them are located on the north-facing side, which allows more light with less heat gain and glare. Our Measurement and Verification Specialist managed the ZNE performance to ensure that the building systems were fully commissioned and that the energy use data was accurate. After one full year of gathering data, we were able to verify that the building used less than energy than it produced. Brummitt’s guidance–with D-BE engagement and the client’s participation–led to a highly successful ZNE outcome. The Alpine Library is proud to have received the Living Building Challenge’s Zero Energy Certification and is the first library certified under the LBC program! Background in measurement and verification for non-residential projects in the K-12, higher education, health care, local government and federal markets